The beauty of the Croatian coast

A beach on the Adriatic Sea.

Croatia is not that famous for tourism in Ireland. Dubrovnik is well known and some of the most popular islands, as well as Istria.

We learned from the Croatians new places to visit after being in the capital Zagreb at the end of 2019 for the Christmas market.

The frequency of flights in September is lower than the peak in summer with only two flights per week. Croatian airlines had appropriate one-way flights Sunday morning direct, not via London, directly to Zagreb. Another option for the islands is Zadar, also served by Croatian and Ryanair.

Not making a package a car rental option can cut travel time in half, compared to public transportation. We used a Car Trawler website and got Enterprise Cars, which also have offices in Waterford.

Arriving in the afternoon after a nearly three hour flight, the car rental turned out to be smooth, aside from needing to take photos of the scratches of previous renters as all other cars were out.

The airport is near the highway and the ring road, so we headed to Rijeka with a toll highway and went to Crikvenica, as to do the island in one day would mean driving in the dark.

Crikvenica is a former fishing port but now a tourist hub with many visitors from Germany, Austria and the Czech region.

We found a fancy hotel for only 60 euros near the beach, found parking nearby and had a 3 course dinner with drinks for only 15 euros, a beer after for less than 3 euros so value for money – price is excellent. Found a nice little museum to learn about the old wooden boats that people used and are in the process of remaking.

The next day we were on the road to the island of Krk and its long bridge to take the ferry to Losinj. It was a busy ferry port with lots of cars waiting and leaving time for a snack and coffee.

The cost of the ferry from Valbiska is around 20 euros by car plus a 25 minute ride to Merag in the northern part of Losinj.

Leaving the ferry, the roads turned out to be grueling, climbing hills with hairpin turns.

The time to Mali Losinj, the main port, was picturesque and even spectacular. Lots of people we have met come here on multiple occasions and are not dominated by package travel. The Germans were the main visitors along with the Austrians, Slovenes and Hungarians and a few Italians.

The tourist office recommended a dolphin tour the next day. The young people leading this operation spoke English very well and told us they had beaten the 2019 numbers ahead of Covid this year since the opening in late June early July.

The EU Digital Covid certificate saw confidence return, said a couple from neighboring Istria we met who worked in tourism. 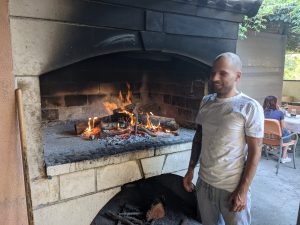 Traditional Balkan cuisine in the open air in Cunski near Losinj.

We had the chance to see ten dolphins during this 2.5 hour trip off the coast of the island of Pag, or as they say the party island for young people. Young families on board were delighted to see dolphins move up and down in 30 minutes near a trawler.

The boat operators have taken pictures of dolphins and are part of a foundation that tries to identify and even name dolphins.

We told them about Kerry mushrooms and could name a Croatian ‘Fungie’ 2021. They like to leave them in the wild, not adopt or feed them. The maximum is 30 minutes of viewing, then they are left in peace.

We did another boat trip that evening on a century old schooner or freighter converted to sail, but there was no wind to see the sunset from Losinj which was amazing. 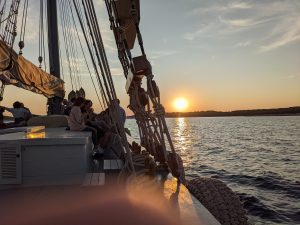 The tour guide on the boat told us about the history of the port which dates back to Roman times. The Venetians were there too, then the Austro-Hungarian Empire. Lots of grain were imported and huge warehouses as well as a shipyard still in operation and under repair. Lots of pleasure craft in the marina with bustling markets too.

The next day we visited a museum dedicated to a Greek Olympian statue discovered by a Belgian diver and carefully restored. The Romans stole many great works of art from Greece and this headed for a Roman villa, but the ship sank and the status remained unknown for centuries and is now on display and worth seeing.

Not a lot of pub culture in Losinj but more cafes and restaurants.

Our hotel had live music outside after dinner until 11pm, all cafes in town closed at midnight. The hotel had 3 courses for less than 20 euros buffet style.

Other places to see is the historic village of Osor, again great street carvings in this port town, a great place to eat.

Back in Losinj, the port area is full of shops and souvenirs. Quieter than Mali is nearby Veli Losinj.

Nice cycle path from Losinj to Cikat along the coast and through a forest, lots of bikes for hire, less than ten euros for half a day. Don’t ask for a bike because they think you want a bike that we refused.

Many people rent electric bikes to climb the nearby hills. You can also go by boat for sightseeing and it is a must in the afternoon to see the sunset.

The beaches can be a bit rocky, so local shops sell plastic bathing shoes, as there are few sandy beaches.

Lots of coral jewelry for sale and handicrafts

It is a beautiful, idyllic place little known in Ireland. Getting there is not easy, but there is a catamaran ferry from Zadar, half a day in summer.

Prices are reasonable but higher in summer, but May-June September are the best months to visit. Less hot but still sunny.

Fishing is the main activity and tourism, as well as portal activities.

Beautiful old town also in Veli and Mali Losinj. This island of Losinj could be compared to an island paradise in Europe and a first choice in our opinion for a must-see vacation in a quiet setting without having to travel to Asia or the Caribbean while staying in the EU.