The meeting of the delegations of Russia and Ukraine on the Ukrainian-Belarusian border, not far from the Pripyat River, is expected to start at any time. Ukrainian President Zelenskiy said yesterday that he did not have high expectations for this meeting. There has been speculation in the international community of experts that the meeting could give Putin potential space to end the war, as his army failed to carry out the planned blitzkrieg and continues to do so. facing setbacks on the battlefield against Ukrainian forces.

It is already the third day of fighting in Kharkiv. There are bombings of the airport and residential areas, the Ukrainian air defense is constantly working:

A rocket hit a residential building in the center of Chernihiv, the lower floors caught fire twice, the number of victims is unknown.

The day before, Aleksey Arestovich, an adviser to the President of Ukraine, said that an attack on Nikolaev and Odessa was being prepared: “11 Russian Federation transport ships, each with a capacity of one battalion, are heading for Odessa , there will be an attempt to land troops”.

Ukrainian President Zelensky, in a phone conversation with British Prime Minister Johnson, said the next 24 hours would be critical for Ukraine, Reuters reported. Johnson said the UK and its allies would do everything possible to ensure defensive aid reached Ukraine.

Ukrainian General Staff: in four days the Russian army lost 4,500 people, 27 units of destroyed and damaged aircraft, helicopters – 26 units, tanks – about 150, SAS – more than 700 units, guns – about 50, a SAM BUK, MLRS BM-21 Grad – 4, 60 fuel tanks, 2 levels of operational and tactical UAVs, ships, boats – 2. Russia has not released any data on losses. Experts recall that 5,000 soldiers died during the two years of the first Chechen war and 15,000 during the 10 years of fighting in Afghanistan.

The Ukrainian Ministry of Internal Affairs cited data on civilian casualties: 352 people, including 14 children, were killed during the four days of the war.

The European Union has banned Russian planes from landing, taking off or flying over its territory. Russian authorities promise to bring Russian tourists to Europe via Istanbul, Dubai and Cairo.

The European Union has banned any operation related to the management of the reserves and assets of the Central Bank of Russia.

Australia has imposed sanctions on Putin, Lavrov, Defense Minister Shoigu, Prime Minister Mishustin and Interior Minister Kolokoltsev. Australia also supported the statement by the United States, Canada, Britain and others regarding the disconnection of some Russian banks from SWIFT and the freezing of Central Bank assets.

The UK will introduce a bill in Parliament today to end money laundering and fraud. All foreigners who own property in the UK will need to be identified by name.

Brazilian President Jair Bolsonaro said that his country does not condemn Russia because of the war in Ukraine, and that in making decisions and statements regarding Moscow, it will be guided by practical considerations, taking into account the partnership of two countries.

Google will no longer allow Russian state media to advertise. The day before, a similar decision had been taken by its YouTube subsidiary.

The issue of the German newspaper Bild came out with a call to Russians in Russian and a call to demonstrate. “In the streets of your cities, you defend the freedom of the whole world. Vladimir Putin threatens many countries with nuclear weapons. He illegally invaded the territory of your brother people in Ukraine. […] We know that you are threatened with beatings and imprisonment. Your exceptional courage is priceless. We don’t want to quarrel with you! […] Russian citizens do not deserve the sanctions, the poverty, the suffering. You should be able to live peacefully and happily in your beautiful country…just like the Ukrainians in theirs and the people of the West. Be brave! Show your president what you think of his war”. 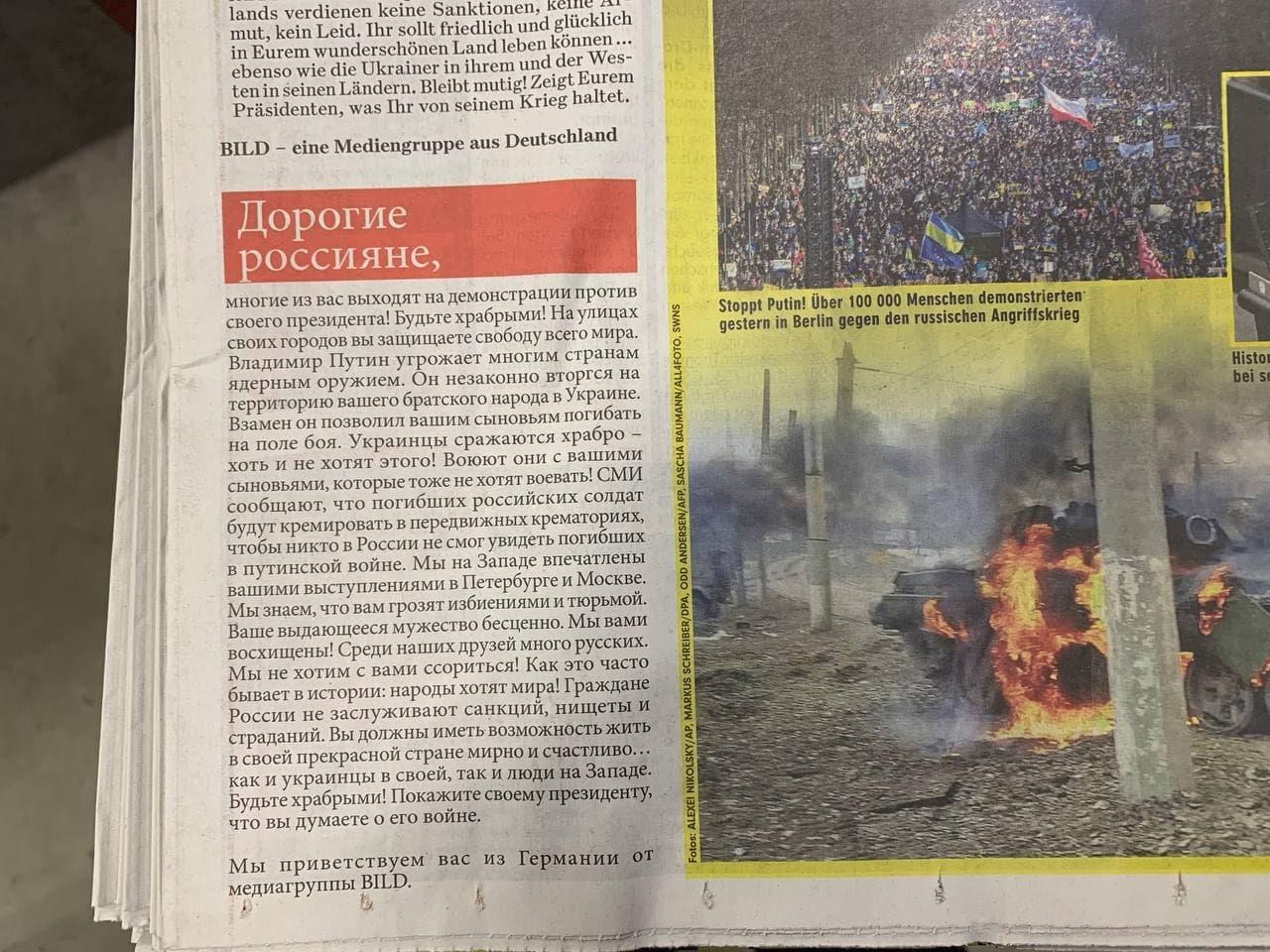 The construction of the nautical tourism port ...