Can there be anything more exhilarating than strolling through an endless lavender sea on a hot summer day, when purple fields meet blue sky?

Better yet, is there anything more relaxing than smelling the magnificent scent that drips from the stems when you brush against them?

The sights and smells of lavender will surround you on Hvar, the colorful Croatian island where dry, chalky soils and long sunny days provide some of the most perfect growing conditions in the world.

Purple reign: the sights and smells of lavender will surround you on the island of Hvar in Croatia

Best of all, Croatia and its islands are now firmly on the UK’s green list, so you can visit without having to quarantine yourself on your return.

Just outside the charming town of Stari Grad you’ll find Old Road, a stunning drive across the island, lined with lavender and rosemary and dotted with rugged vineyards and olive groves. Explore beyond the narrow, winding paths and you’ll find yourself in isolated hilly villages and walled towns displaying the most paradisiacal harvests from June to the end of August.

One place that attracts lavender lovers and novices year after year is Velo Grablje, a 15-minute drive from Hvar. 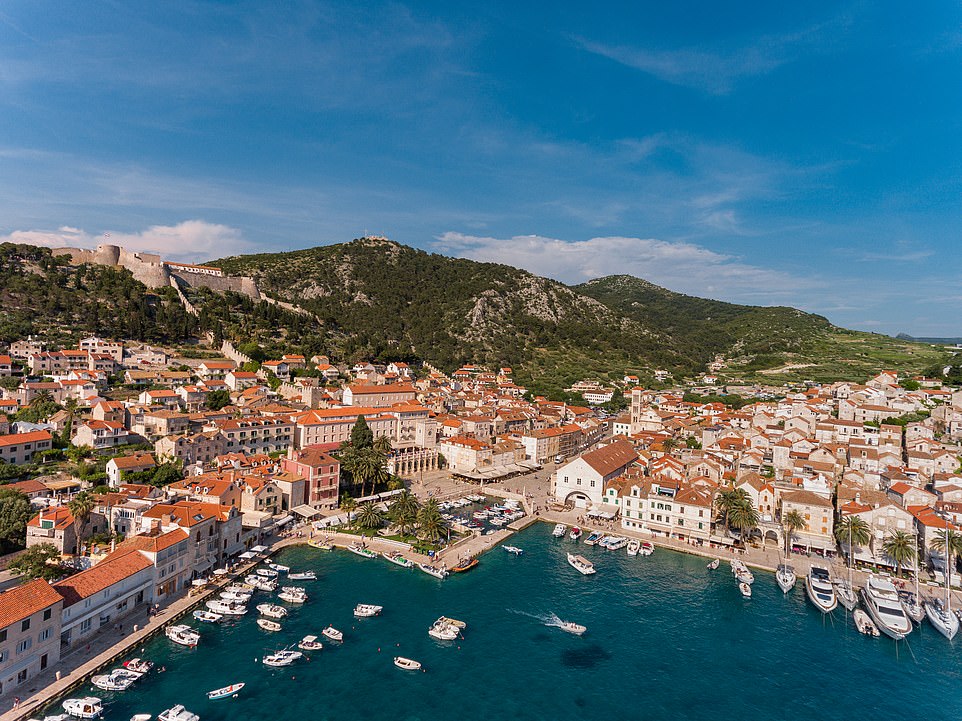 Croatia and its islands are now firmly on the UK’s green list, so you can visit without having to quarantine on your return. In the photo, the pretty port of Hvar

Lavender has flourished here for over 100 years, and in the 1960s, this small village alone accounted for 1% of the world’s lavender production.

Velo Grablje dates back to the 15th century, and with just 14 residents living in its old honey stone houses, it feels like the modern world has been kept at bay.

It is now protected as an “ethno-ecological village” – a project launched by local authorities in 2005 to take care of the remains of ancient Dalmatia and restrict development.

Designed to conserve and promote the precious heritage of Velo Grablje, the annual two-day Lavender Festival is now in its 13th year and attracts visitors from all over the world to celebrate all things lavender. It usually takes place to mark the start of the harvest – but here lavender is celebrated all year round.

Cultural immersion in traditional lavender production begins at dawn with what the villagers call The Picking, on a hill carpeted with purple bands.

Strong scents of lavender permeate the air and bees buzz as tourists reach for the plow and mimic cheerful villagers like 88-year-old Nikola Zaninovic Malabonkin. It demonstrates the ancient harvesting technique of grabbing a bunch of lavender stems with one hand and using a sickle in the other to drag and cut them.

The cut stems are stuffed into a giant bag, then transported to the village distillery, built in 1905. 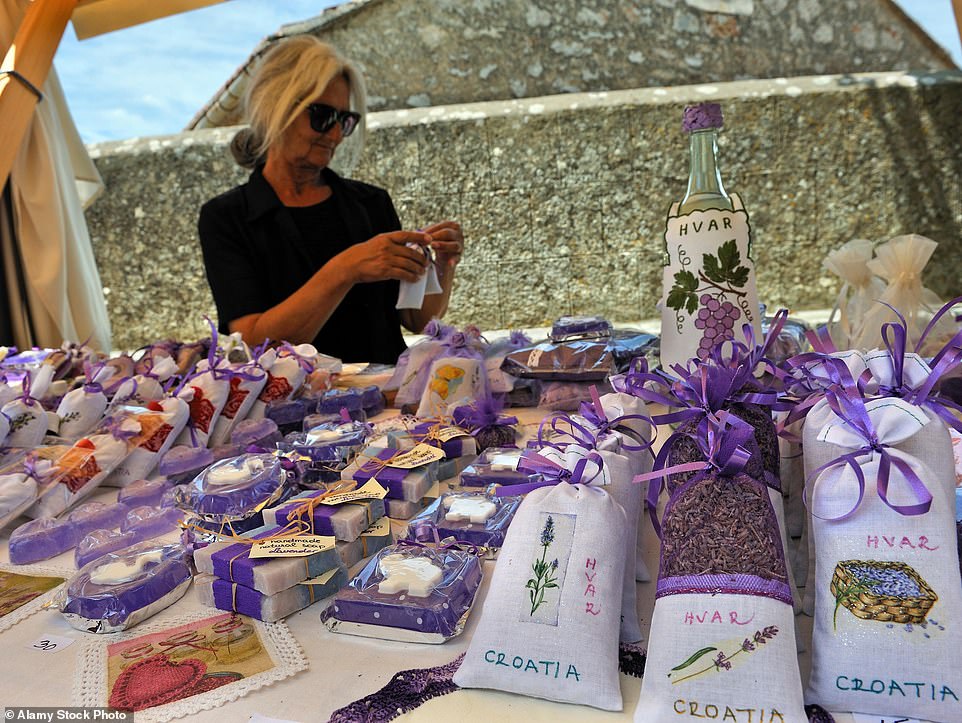 Taste a bargain: a booth at the famous Velo Grablje Lavender Festival, which attracts visitors from all over the world

Here visitors can witness the traditional distillation of lavender and rosemary oil being processed in old cauldrons, which were the first of their kind in Croatia and are still in use today. Locals revere the distillery as a rare monument to be preserved, as it is one of the last places where you can really smell the scent of ancient Hvar.

Unlike the vast grass fields of Provence, for example, the rocky landscapes of Velo Grablje have been cultivated in a network of dry stone terraces. This makes it incompatible with modern machinery but is well suited for the traditional method of hand-picking lavender.

Although this means that the harvest these days is relatively modest, the villagers are incredibly generous with their harvest, and once the picking is complete, each visitor receives a bunch of fresh lavender.

For a wonderful historical perspective, head downtown and spot a terracotta-colored house where a plaque commemorates Barba Borto, the first man to plant lavender in Hvar, in the 1920s. His grandson Bartul Tomicic now lives in the house and invites visitors to browse his archive of manuscripts that chronicle Velo Grablje’s unique role in Hvar’s lavender history.

Another local hero to watch out for at the festival is Lavenderman, the village mascot, a purple-robed comic book superhero who is armed with a sickle, lavender stalk, and superpowers that include fighting. … Moths. 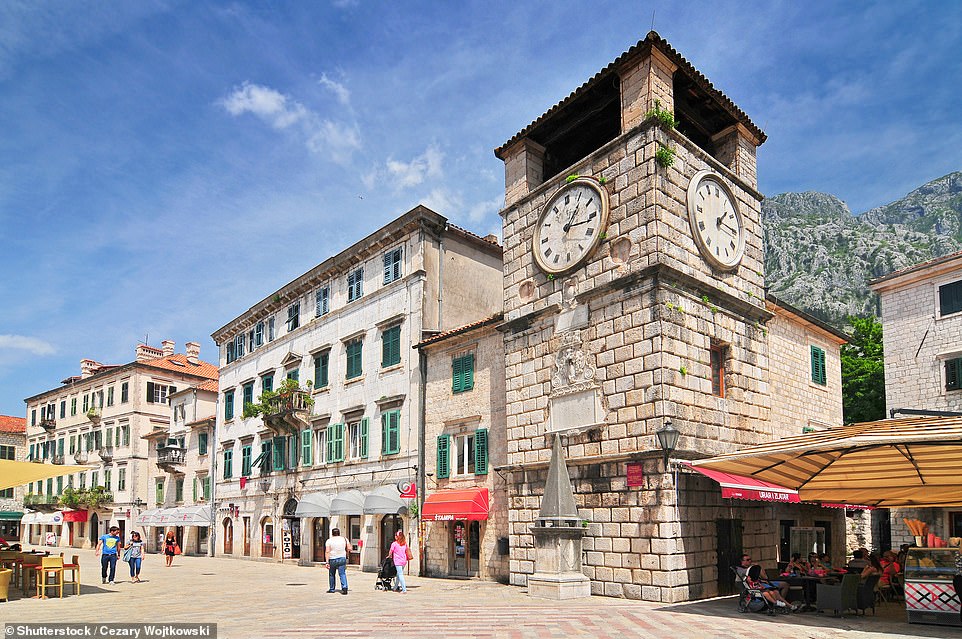 To stock up on lavender, head to the bazaar where you’ll find wonderful oils, soaps, perfumes, creams and pretty lavender-scented pillowcases.

You can also taste Hvar wines, olive oils and local treats such as honey cookies. And don’t miss the Crobucha Kombucha stand which sells a delicious Croatian version of the popular fermented tea drink made from local lavender. Part of the profits go to Velo Grablje.

There are also workshops led by herbal experts, educating visitors about the future of lavender cultivation, new technologies, analysis and research. At the end of the day, the real fun begins when local artists take the stage for a concert.

This small island with a welcoming big heart remains open for visitors to explore even without the glamor of the Lavender Festival, and the cobbled streets of Stari Grad are your next best bet for an aromatic dose.

Generations of Hvarians have been fortunate enough to make a comfortable living thanks to lavender, and Stari Grad has taken the brand to its limits so that every stall and souvenir shop is filled with purple goods. Even the menus are created around the fragrant herb so you can purchase lavender cheesecake, lavender honey, and lavender marmalade.

In this gourmet corner of Hvar, bistros and authentic konoba-style restaurants (rustic tavern-style restaurants) offer treats and infused drinks. At Bistro Kod Damira you can feast on traditional lavender cakes that can be paired well with a glass of lavender champagne – with lavender ice cream this is something you must try, but you will love it or hate it. 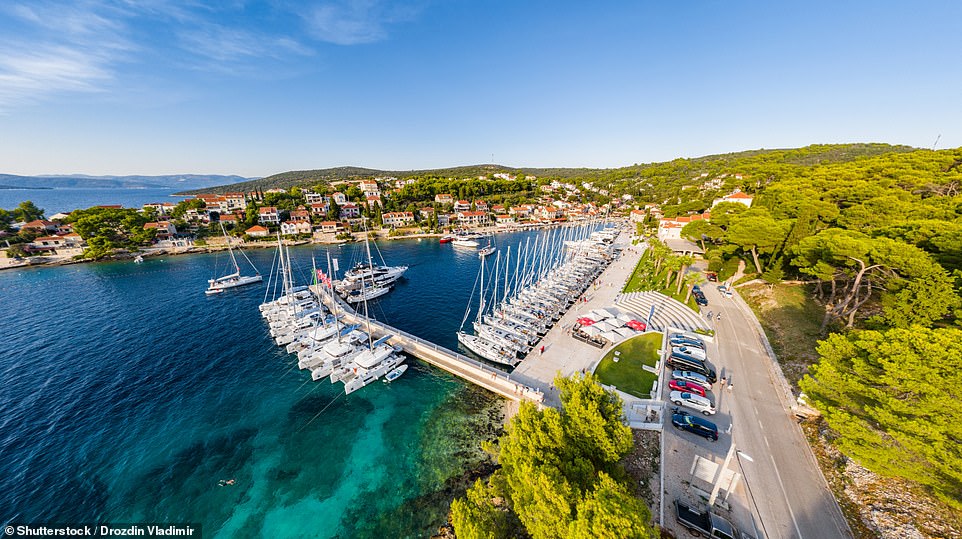 Pictured is Maslinica, home to the five-star Maslina Resort, where the focus is on ‘conscious luxury’

British Airways, easyJet, Tui and Jet2 offer flights to Split from £ 110 return. Ferries and catamarans from Split to Hvar take around an hour and cost around £ 10 each way. Get timetables and more information on ferrycroatia.com.

Whatever your verdict, savor the taste as it will remind you of a vacation on one of the most beautiful islands in the Adriatic.

Beyond sun, sea and shopping, Hvar has been recognized as a destination for recovery and wellness since 1868. Herbal treatments are popular and can be enjoyed in many wellness centers around the region. The best known is the five-star Maslina Resort on Maslinica Bay. Book in its Pharomatiq spa and you will find a menu of treatments with a concept inspired by the garden to the skin. Expect only herbs hand-picked from the resort’s garden, such as lavender, sweet wormwood, and rosemary, infused in local oils and used in bespoke treatments.

The Adriatic Rejuvenation Treatment and Intuitive Massage are energizing and will take your senses on a relaxing journey through the aroma world of the region. Try sound healing techniques, which contribute to a deeper state of relaxation, and you, like me, could be falling asleep in no time. Or start your day at 9 a.m. with a Zen outdoor yoga session.

Maslina is all about “conscious luxury” – travel buzzwords that translate into expensive yet understated sophistication. The architecture incorporates stone from the island of Brac and Iroko wood which blend into the natural environment. This makes it a sublime hideaway for solo travelers like me and families. Guests are cocooned in two hectares of land naturally decorated with olive and pine trees, with the Adriatic Sea, pearly white rocks and dense green forest as a backdrop.

The property is secluded, with just 53 rooms and three villas with stunning sea views. The restaurant is run by Michelin-starred French chef Serge Gouloumes, who has created a farm-to-plate menu with traditional dishes Croats such as gregada fish stew, a tribute to the Croatian coast, fresh seafood like langoustine with a cauliflower crumble, and classic Mediterranean favorites.

Beyond the beach bar, the two swimming pools and the library, the Experience team can offer you a tailor-made itinerary, whether you want a cultural visit to the villages, a day by bike or a wine tasting in the best vineyards in the region.

And of course, they can always tell you where to find the best lavender, so no matter where you go, you’ll never be far from that heavenly scent of Purple Reign.

Lessons from forest fires in Turkey