Croatia Airlines and Air Serbia face the challenge of Sarajevo

Croatia Airlines and Air Serbia face increasing competition in Sarajevo after the airport began to proactively court foreign carriers and Wizz Air established its base in the city. Sarajevo Airport has relied for years on network operators to provide it with connectivity to most parts of the continent. Wizz Air has already become the largest airline in the capital of Bosnia and Herzegovina in terms of frequencies and capacity. In addition, the new Lufthansa route from Frankfurt, which will double daily in the next summer season, as well as the entry of Swiss into the market, are also expected to hamper the performance of Croatia Airlines and Air Serbia in the capital of the region. Bosnia and Herzegovina. Swiss has now upgraded the initially seasonal service to year-round operations, with flights to be maintained twice a week during the winter, increasing to six a week during the Christmas peak and holidays.

Croatia Airlines carries a significant number of transfer passengers on its flights to and from Sarajevo. It has capitalized on the airport’s lack of connectivity with major European cities in the past. However, the airline has slowly started to lose its share of the connecting passenger market to and from Sarajevo, which now accounts for just 6% of all airport transfers. Based on OAG data, points to major cities in Western Europe dominated as the most popular connecting destinations on the carrier’s flights to Sarajevo, including Frankfurt, Zurich, Amsterdam and London. In 2020, there was a significant reduction in passenger flow, however, Western European points remained the most popular with connecting passengers. This summer, Lufthansa and Swiss launched operations from Frankfurt and Zurich, respectively, which are Croatia Airlines’ most popular destinations to and from the capital of Bosnia and Herzegovina.

Main Croatia Airlines O&D points to / from Sarajevo in 2019 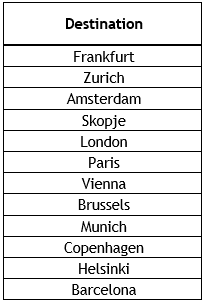 Main Croatia Airlines O&D points to / from Sarajevo in 2020 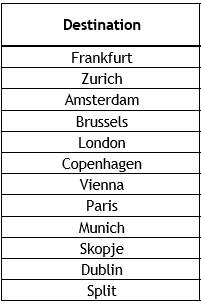 Air Serbia managed to increase its share of transfer passengers on its flights to Sarajevo from 3% in 2019 to 6% last year, mainly due to the decrease in the number of airlines serving the city due to the pandemic of coronavirus. European destinations dominated Air Serbia’s connecting traffic to and from Sarajevo in 2019 and 2020. In the top twenty, New York was the only non-European city, ranking sixteenth two years ago and thirteenth in 2020. The arrival of new carriers is also expected to have an impact on Air Serbia, especially its service to Zurich due to Swiss operations, but it also faces strong competition from Wizz, which will cover major points in Europe , but mainly via secondary airports. However, the airline could be more sheltered as it offers a wider network with more destinations that are not served from Sarajevo. 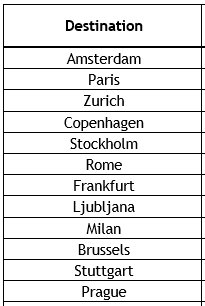 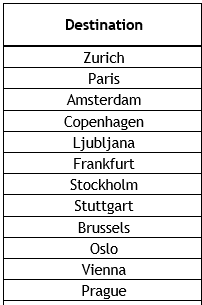 Countries you can visit without quarantine